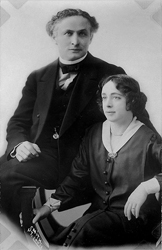 Known to the world as "The Great Houdini," Harry Houdini has gone down in history as one of the best magicians in the world. Not only because of his amazing escape stunts, but also because of his audacity and showmanship. Houdini helped structure and define an art that is still adhered to by many practicing performers. Whether it would be holding his breath while escaping an underwater cell, or freeing himself from a straight jacket, Houdini baffled, surprised, and amazed countless audiences with his magic.

Although the autobiography of Harry Houdini might claim that he was born in Wisconsin, it is known that his real name was Erich Weiss and that he was born in Hungary to a Rabbi named Samuel Weiss. It is also known that he had two brothers and a sister. In his biography, entitled The Life and Many Deaths of Harry Houdini, Ruth Brandon admits that evidence suggests the family first moved to Wisconsin and later to New York. 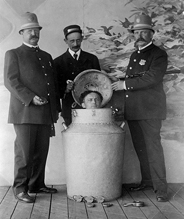 Young Harry was always fascinated by magic. Even though the family was quite poor, he would perform magic tricks he made up for the family. Later in his adolescence, he joined a circus and was known as Eric, Prince of the Air. At the young age of 17, in despair by poverty and limits set by society for Jews at the time, Harry told his family that he was going to be a performer named Houdini, christened after the famous French magician Houdin. By the age of 20, Houdini had been performing small acts and shows throughout New York. Houdini soon married and the couple joined a circus. Houdini would swallow needles, pick locks, and perform mind-reading tricks.

Houdini was on the venue of the Hopkins Theatre in Chicago for gaining public attention after he repeatedly escaped from local police handcuffs and even from jail. After touring America, he began touring Europe with great success. Houdini, knowing the public always demanded more and wanting to keep ahead of his rivals, would escape from coffins, straightjackets and anything else he could think of.

In his later years, Houdini made a natural transition into film and worked as the Master Detective named Locke. In the films, Houdini would also make great escapes. In his private life, Houdini became obsessed with other forms of magic, namely in attempting to contact those beyond the grave. But, finding nothing that seemed to be real, he soon abandoned the idea and even publicly declared certain mystics frauds. Houdini died on Halloween Day in 1926 after a bout of peritonitis that was made worse due to the fact that a college student punched him in his stomach – something Houdini wanted him to do, as he always bragged he had one of the strongest abdomens. Tragically, however, the punch came before Houdini had prepared himself for the blow.